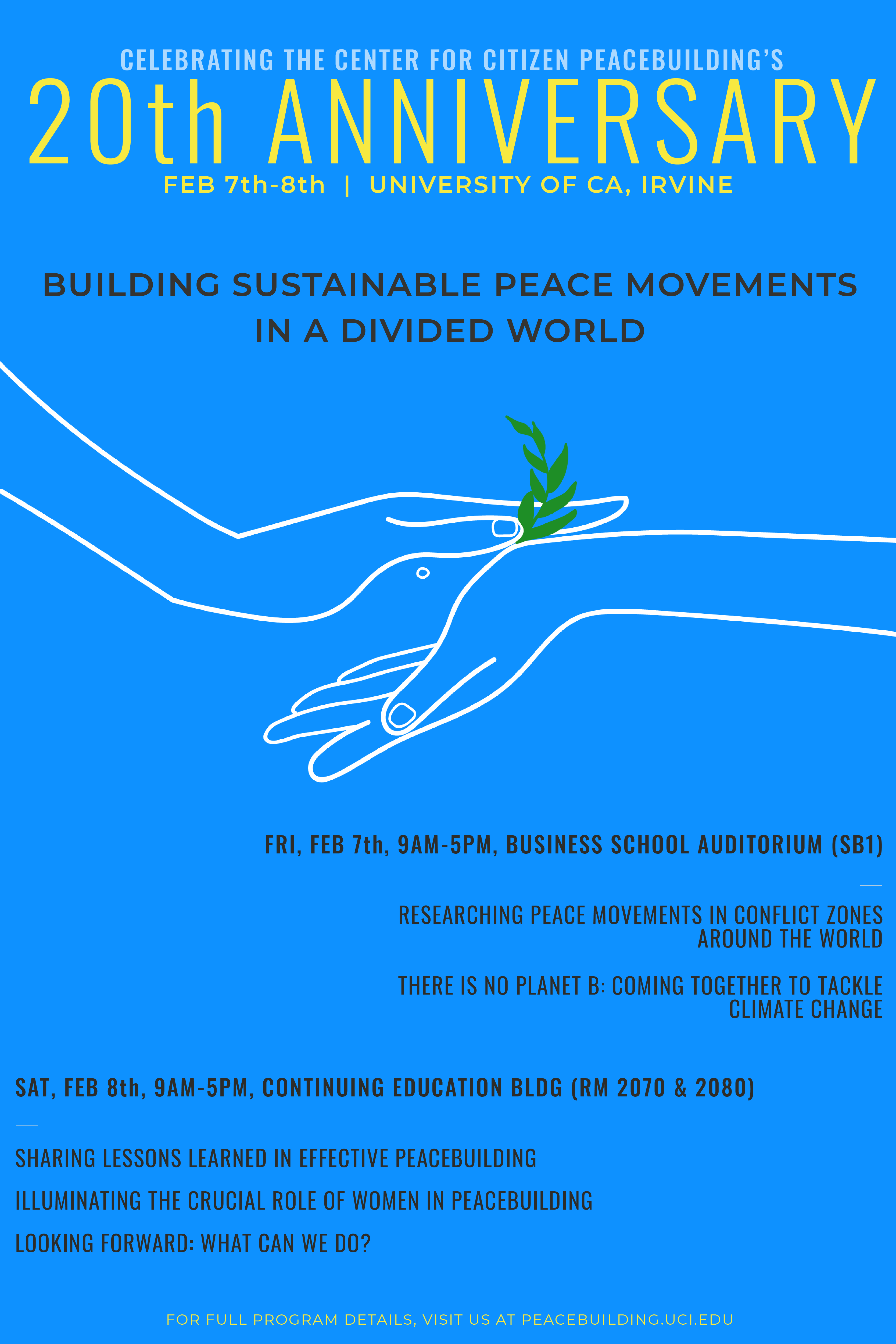 Since its inception in 1999, the UCI Center for Citizen Peacebuilding has sponsored faculty and student research, advanced education on the topic, and has organized partnership initiatives to improve and expand citizen peacebuilding in the United States and around the world. Long-term citizen peacebuilding is the most impactful, but we have few examples of decades-plus partnerships in a single context. In acknowledgment and celebration of its 20-year history, the Center has organized a two-day symposium, “Building Sustainable Peace Movements in a Divided World,” to discuss with other scholars and practitioners what we have learned from our research and long-term engagement in several case studies. These consist of identity-based violent conflicts in divided societies where citizen peacebuilding is still underway decades after large-scale violence has occurred. In a series of learning sessions on peace and sustainability, our inter-generational dialogues will focus on the research of former students in various conflict zones, the critical role women play in building peace, the impact peacebuilders can have on climate change, the lessons learned from ongoing, long-term citizen peacebuilding partnerships, and how we might do this work better. The examination of citizen peacebuilding is all the more urgent today given the increasingly rancorous political divisiveness in the U.S. and elsewhere. This conference will discuss methods for reducing conflict, preventing violence, and building sustainable peace in our increasingly divided world.

A copy of the Schedule of Events Program may be found here.

Video recordings of additional symposium sessions are below.

Posters illustrating the work of the Center will be available for viewing throughout the event.

10:00am - 12:30pm: RESEARCHING PEACE MOVEMENTS IN CONFLICT ZONES AROUND THE WORLD: REPORTS FROM FORMER KUGELMAN FELLOWS

9:00am - 10:45am: SHARING LESSONS LEARNED IN EFFECTIVE PEACEBUILDING: WHAT DOES SUCCESS LOOK LIKE?

11:00am - 12:45pm: ILLUMINATING THE CRUCIAL ROLE OF WOMEN IN PEACEBUILDING